The Flying-probe-test (FPT) is an electrical test method by which electronic circuit boards and assemblies can be tested quickly and reliably with high test coverage. 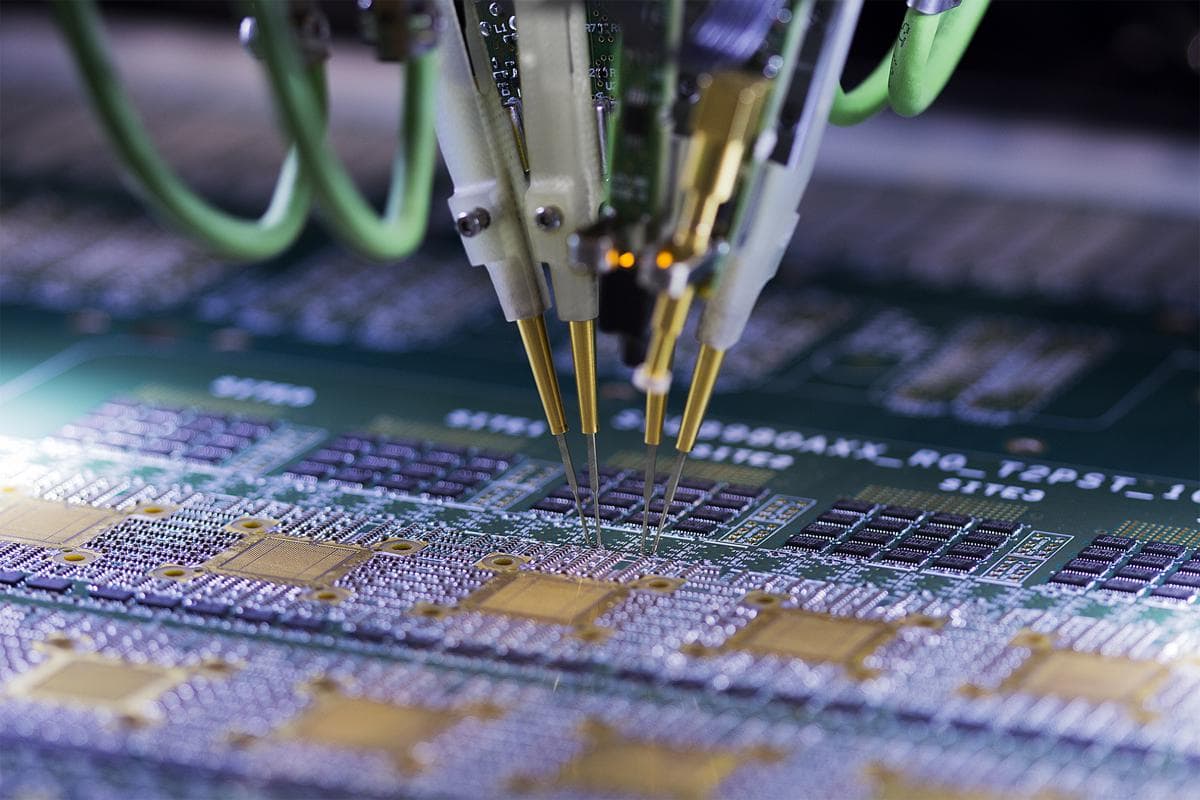 The Flying-probe-test (FPT) is an electrical test method by which electronic circuit boards and assemblies can be tested quickly and reliably with high test coverage. It is based on the principle of in-circuit testing (ICT).

Normally, in-circuit tests use fixed adapters or needle carrier plates that have to be individually designed and manufactured for each product design. In contrast, a Flying-probe-testerfeatures a small number of movable test needles (probes), which in turn can be flexibly programmed. While needle-bed based in-circuit testers are more suitable for large quantities, Flying-probe-testers, due to their characteristics, are a cost-efficient and flexible solution especially for the production of prototypes, pre-series, small series and assemblies without test points.

What is the relevance of Flying-probe-testing?

Current trends in the production of electronic assemblies speak for a preferential use of Flying-probe-test technology:

As assemblies become more and more compact with high functional densities, the number of defect sources is also increasing. This requires an intensification of the test depth, which, however, turns out to be difficult due to some designs.

More and more developers are foregoing the establishment of predefined test points – mostly for spatial reasons. However, the consequence is that conventional functional tests such as the in-circuit test can no longer be used to test electrical functions. In such cases, intensive testing of the finished products can only take place immediately before distribution. However, this entails the considerable risk that entire batches may be held back as defective and have to be reworked.

Even in the case of prototypes, testing by means of in-circuit tests with rigid needle bed adapters makes little sense: If a change in layout or redesign is required, adapting the test programs and developing corresponding new test fixtures would be too time-consuming, costly and inflexible. The same applies to small series production.

The adaptable test procedure of Flying-probe-testing allows high test coverage and considerable quality increases to be achieved, while at the same time shortening set-up and throughput times.

In what areas of application are flying probe tests suitable?

The testers can be used to perform comprehensive tests on PCBs and components, such as measuring circuit nodes or determining specific parameters such as resistance, capacitance and inductance.

Flying-probe-tests are particularly suitable for assemblies without test points. Even highly compact assemblies with small component clearances (less than 0.3 mm) can be tested using this method, as the test needles can be positioned extremely precisely. In this way, very high defect detection can be achieved.

For prototypes and small batch sizes, Flying-probe-testing is the best choice, since in-circuit testsand their preparation are time-consuming and costly, as well as being inflexible with regard to changes. Especially for early prototypes, the sources of errors can be manifold, but can be narrowed down with little effort by means of Flying-probe-testing. Design changes to the assemblies do not require any time-consuming and cost-intensive modification of the needle bed adapter, but can be quickly and easily integrated into the test process by means of a program adaptation that includes the new test point coordinates.

By means of freely movable inspection needles, which were positioned program-controlled via linear air-bearing motors at correspondingly specified coordinate points on the printed circuit board, the top and bottom sides of the components can be scanned simultaneously. This test contact is made at electrical nodes directly on the conductor tracks, on component solder pads, on SMD connection pins or – if available – on test pads.

The procedure can be used to locate defects on assemblies such as soldering and press-fit defects, short circuits or interruptions, and to correct them if desired.

Which test systems does testwerk use?

SPEA testers offer the advantages of a two-sided flying probe system with the possibility of integrating additional tools such as fixed probes.

A single test program works for both sides of an electronic board: Moving test heads on the top and bottom of SPEA testers allow boards to be tested simultaneously on both sides. This increases test coverage and throughput.

Not only is it possible to perform purely electrical tests, but also, for example, test combinations, boundary scans and functional tests.

On your behalf, we create the test programs suitable for your needs and also perform the tests (contract testing).

In addition to electronics tests, other functional tests can be integrated into the test: 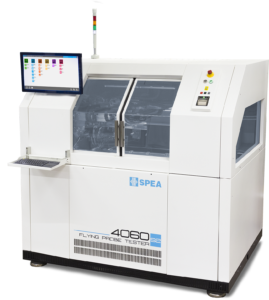 Shortening of the time-to-market

No manufacturing costs for test fixtures

Are you interested in Flying-probe-testing and need more information?

Reach out to us – by phone or conveniently via our online form.

We are looking forward to your request!